NSFW
I was chatting with Dustin about his upcoming trip and since he doesn't have a Blue Tooth communication set, thought a few of these would come in handy:

For those of you who want winter to just go away.

The news at lunch today a grizzly knocked a mountain biker down on one of the trails near here. It bit into his backpack and right into a can of bear spray! It promptly ran away, the biker was too spicey!.

I need to remember my bear spray since I seem to find them all the time.

So I had to transport a couple of air tanks home from work today for my compressor, so I thought I would have a bit of fun with the more gullible commuters. I put a section of red hose on just for effect, and wrote on the tanks with felt marker. At the first light a young guy was leaned forward reading what was on the back of the tanks, and when the light turned green, I gassed it pretty hard, leaving the cars a ways back. At the next light the two cars that were in the two lanes right behind me stayed a car length and a half back, giving me a bit of a chuckle. 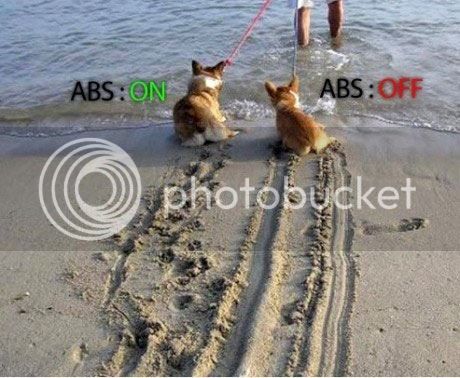 The first time I saw that, I really wondered what was going on. Pretty cool.

What was that Frozen movie about?!?!? Unnecessary censorship... it's funny.

:roflocket Tazer Stun Gun, a great gift for the wife.
A guy who purchased his lovely wife a pocket Tazer for their anniversary submitted this:

Last weekend I saw something at Larry's Pistol & Pawn Shop that sparked my interest. The occasion was our 15th anniversary and I was looking for a little something extra for my wife Julie. What I came across was a 100,000-volt, pocket/purse-sized Tazer.

The effects of the Tazer were supposed to be short lived, with no long term adverse affect on your assailant, allowing her adequate time to retreat to safety...??

WAY TOO COOL! Long story short, I bought the device and brought it home... I loaded two AAA batteries in the darn thing and pushed the button.. Nothing! I was disappointed. I learned, however, that if I pushed the button and pressed it against a metal surface at the same time, I'd get the blue arc of electricity darting back and forth between the prongs.

AWESOME!!! Unfortunately, I have yet to explain to Julie what that burn spot is on the face of her microwave.

Okay, so I was home alone with this new toy, thinking to myself that it couldn't be all that bad with only two AAA batteries, right?

There I sat in my recliner, my cat Gracie looking on intently (trusting little soul) while I was reading the directions and thinking that I really needed to try thi s t hing out on a flesh & blood moving target.

I must admit I thought about zapping Gracie (for a fraction of a second) and then thought better of it. She is such a sweet cat. But, if I was going to give this thing to my wife to protect herself against a mugger, I did want some assurance that it would work as advertised.

So, there I sat! In a pair of shorts and a tank top with my reading glasses perched delicately on the bridge of my nose, directions in one hand, and Tazer in another.

The directions said that:
A one-second burst would shock and disorient your assailant;

A two-second burst was supposed to cause muscle spasms and a major loss of bodily control; and

A three-second burst would purportedly make your assailant flop on the ground like a fish out of water.

Any burst longer than three seconds would be wasting the batteries.
All the while I'm looking at this little device measuring about 5" long, less than 3/4 inch in circumference (loaded with two itsy, bitsy AAA batteries); pretty cute really, and thinking to myself, 'no possible way!'

What happened next is almost beyond description, but I'll do my best.

I'm sitting there alone, Gracie looking on with her head ****ed to one side so as to say, 'Don't do it stupid,' reasoning that a one second burst from such a tiny lil ole thing couldn't hurt all that bad.. I decided to give myself a one second burst just for heck of it.

I touched the prongs to my naked thigh, pushed the button, and...

HOLY MOTHER OF GOD. WEAPONS OF MASS DESTRUCTION. WHAT THE... !!!

I'm pretty sure Hulk Hogan ran in through the side door, picked me up in the recliner, then body slammed us both on the carpet, over and over and over again. I vaguely recall waking up on my side in the fetal position, with tears in my eyes, body soaking wet, both nipples on fire, testicles nowhere to be found, with my left arm tucked under my body in the oddest position, and tingling in my legs! The cat was making meowing sounds I had never heard before, clinging to a picture frame hanging above the fireplace, obviously in an attempt to avoid getting slammed by my body flopping all over the living room.

Note:
If you ever feel compelled to 'mug' yourself with a Tazer,
One note of caution:

There is NO such thing as a one second burst when you zap yourself! You will not let go of that thing until it is dislodged from your hand by a violent thrashing about on the floor!
A three second burst would be considered conservative!

A minute or so later (I can't be sure, as time was a relative thing at that point), I collected my wits (what little I had left), sat up and surveyed the landscape.
•My bent reading glasses were on the mantel of the fireplace.
•The recliner was upside down and about 8 feet or so from where it originally was.
•My triceps, right thigh and both nipples were still twitching.
•My face felt like it had been shot up with Novocain, and my bottom lip weighed 88 lbs.
•I had no control over the drooling.
•Apparently I had crapped in my shorts, but was too numb to know for sure, and my sense of smell was gone.
•I saw a faint smoke cloud above my head, which I believe came from my hair.
I'm still looking for my testicles and I'm offering a significant reward for their safe return!

PS: My wife can't stop laughing about my experience, loved the gift and now regularly threatens me with it!

Today I was working in the garage with my brother-in-law. We'd had a pretty tough 24 hours, having broken a bolt off the night before and were wracking our brains trying to figure out how to get something between the radiator and the engine that could extract the bolt. Feeling a little punchy, here's a snippet from the conversation:

Me: "I don't remember the last time I had to tap something, but I just remember it being a bitch."
Him: "Please don't tell me you're talking about my sister."

A blonde driving a car became lost in a snowstorm. She didn't panic however, because she remembered what her dad had once told her. "If you ever get stuck in a snowstorm, just wait for a snow plow to come by and follow it." Sure enough, pretty soon a snow plow came by, and she started to follow it. She followed the plow for about forty-five minutes. Finally the driver of the truck got out and asked her what she was doing. And she explained that her dad had told her if she ever got stuck in a snow storm, to follow a plow. The driver nodded and said, "Well, I'm done with the Wal-Mart parking lot, do you want to follow me over to Best Buy now?"

When riding in Canada, remember to check your six now and again.

The view from my Calgary window today.